What is the EFT Therapy?

EFT Therapy also called the Emotional Freedom Technique is a powerful technique to get rid of negative beliefs.  It is a relatively new technique and has been around for about 25 years.  It has been used on Vietnam Vets and 911 victims and was one of only therapies that worked to get rid of their PTSD and traumas.  It is gaining in popularity and Ben Affleck and Matt Damon used it to quit smoking.

The EFT Therapy was invented by Gary Craig who was a Stamford Engineer who had a strong interest in Personal Development.  EFT Therapy is based on Chinese Medicine and is considered an emotional version of acupuncture.  Instead of using needles, you tap on  selected acupuncture points on the head and body with your fingertips while saying certain words and phrases.

Please watch this video.  It shows you what is possible with EFT Therapy.  It also shows results of a blood test, before and after using EFT Therapy.

How does EFT Therapy work?

The five main reasons EFT Therapy works are as follows:

1. Clears meridians.  According to the principles of Chinese Medicine, EFT Therapy clears the negative belief out of the meridian or energy system of the body.  Most people think that if we have a negative belief or experience a trauma, that this negativity is stored only in the mind.  It is also stored in the body’s energy field and EFT Therapy helps to clear it.
2. Entrains the brain into the Theta brainwave state.  The motion of tapping entrains the brain into a light trance.   The words that are said go into the subconscious at a deep level.
3. Desensitizing.  The constant tapping and repeating of phrases becomes monotonous and desensitizes you to the problem.
4. Calming.  EFT Therapy is instantly calming and helps you to be able to think more clearly about the problem.
5. Helps You Love Yourself More.  The main setup phrase uses the words, Even though I have this problem, I deeply and completely love and accept myself.  While this sounds simple, it is very powerful because we cannot make big changes in our lives if we do not love and accept ourselves. It is fast, easy and what I like best about EFT Therapy is that you instantly feel calmer in minutes.

There is a sequence of 10 points that are listed below. 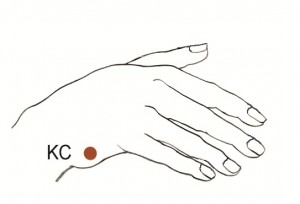 Please watch this video.  It will show you where the points are and will give you a general idea of how to use EFT Therapy.  The instructions below show the exact technique and goes into more detail.

You lightly tap on each point on both sides of the body with the index and middle finger of each hand.  Each sequence of the 10 points is called a round.  At the beginning of each round, you make an assessment on a scale of zero to ten of how bad your problem is, with ten being extremely intense and one having no charge whatsoever.

Then you move onto the other 10 points and you say a shorter reminder phrase while tapping on each point.

This is considered one round.  At the end of the round, you take a deep breath and access how strong your feeling is now on a scale of one to ten.  Usually, it will be much lower after one round, and often it does take several rounds to get it down to a 2 or less.

Some people worry that by repeating such negative phrases that you could be attracting negative things to you but this is not the case.  EFT Therapy is all about clearing out the negative and you should be as negative as possible.

As you go through each round and your emotional charge begins to come down, you can begin to add in positive statements. On your next round, you would access how strong your emotion is.  You might say “Even though I don’t have enough money to pay the rent, I choose to release this belief and I choose to be successful and prosperous anyway.”  You would say this three times.

You take a deep breath and access how you are feeling now.  You should be feeling significantly better and you would want to be more positive on the next round. You might say “Even though I don’t have enough money to pay the rent, I choose to release this belief and I trust the money is coming.” You would say this three times.

Top of the Head, “Maybe all of the money I need will come to me by the end of the month” Eyebrow – “I have been through this before and it always works out.”
Outside of eye – “I am taking a lot of steps to improve my business.”
Under eye – “Things always work out for me.”
Under nose – “There still are 5 days left in the month”
Under chin  – “Maybe I will get some new clients”
Collarbone – “I do have a couple of messages I still have to return.”
Under arm – “Maybe I really can come up with the money.”
Wrist – “I am committed to finding a way to pay the rent.” By this point, you should be feeling a lot better.

You could do one more round that is super positive. You might say “Even though I need more money to pay the rent, I know I will get it and I choose be extremely successful and prosperous!.” You would say this three times.

My Story with EFT Therapy

When I first heard of EFT Therapy, I have to admit that I was very skeptical about it and really did not think that tapping could really improve my life.

After the banking crisis several years ago, my business decreased significantly, and  I was very worried.  I found myself on iTunes one day, searching through the podcasts in the self-help section, looking for some kind of answer.  I came across a podcast about the Emotional Freedom Technique called EFT Talk.  I don’t think it is still available, but if it is, you should definitely download it because it was great.  Even though I was skeptical of the Emotional Freedom Technique the first time I heard about it, I decided to give it another chance.  I was fascinated by all of the stories of people who had improved their lives with it.

It is best to start tapping on the negative aspects of the situation knowing that you are releasing the negative thoughts, not reinforcing them.

If you are unsure of what to say, pretend you are venting to a close friend or family member.  After a round or two of negative, you should be calmer and thinking more clearly and be ready to shift to more positive statements.

If you are unsure of what to say when you shift to the positive, you will want to ask yourself questions like, “How can I look at this problem differently?” or “What resources do I have to help solve this problem?” or “What are the positive aspects of this problem/person?  Write these feelings out before you begin the next round.