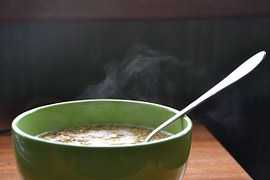 Bone broth is a nourishing elixir made by cooking the bones of animals over low heat for at least several hours up to 24-48 hours.  Consuming bone broth on a daily basis is a great way to make your diet more nutrient dense.  Bones are loaded with nutrients such as glucosamine, chondroitin, gelatin, amino acids and minerals such as calcium, magnesium, phosphorous and trace minerals that we need to be healthy.

Every culture in history consumed some sort of broth made from bones. In the 1930s, Weston A. Price, a Dentist who also studied nutrition, traveled the world and studied with indigenous cultures who were cut off from modern society. These people were very healthy and had almost no incidences of modern illnesses. All of them consumed some form of bone broth, and thrived from the benefits of bone broth.

Other ways to use Bone Broth

What did you learn about bone broth from this article?

Have you ever tried bone broth?

What other topics would you like to read about here?